After your treating doctor has released you from his/her care because your condition has either fully resolved or will not get any better with additional treatment (Maximum Medical Improvement), you may be entitled to a settlement or award if you are left with some form of permanent physical disability or loss of use to the body part that was injured, or to the body as a whole.  This is referred to as Permanent Partial Disability, or PPD, defined as:

a) the complete or partial loss of a part of the body; or

b) the complete or partial loss of use of a part of the body; or

c) the partial loss of use of the body as a whole.

The term “loss of use” generally means that your ability to do certain things that you were able to do before the work injury has been limited in some capacity, or that you do not have the same degree of functionality that you once did prior to becoming injured.

Because it is based on the permanent nature of your injury, PPD cannot be determined until you have reached Maximum Medical Improvement (MMI).  It is calculated by taking 60% of your Average Weekly Wage (AWW) multiplied by a set number of weeks of compensation given for each body part you have injured.  Each part of the body is worth a different number of weeks of PPD depending on the severity or nature of the injury, the treatment that was needed to bring you to MMI, and/or your permanent work status or ability.﻿

PPD compensation is most often paid in a lump sum negotiated by your attorney with the insurance company in exchange for your agreement to waive all future benefits, but it can also come in the form of an award by an arbitrator if your case goes to trial.﻿﻿  If you are not represented by an attorney, the insurance company may attempt to close your claim by ﻿making a low ball settlement offer directly to you based on its belief that you have no idea what your injury is really worth.  This is why having a skilled and knowledgeable attorney who specializes in Workers' Compensation law on your side can maximize the amount of compensation that you can recover for your injury(s).﻿ 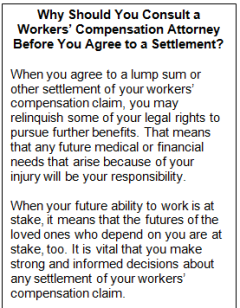